And how a porcupine almost turned us into dinner

Day 4 started out early. As in sometime just barely after day 3. Priscilla wanted us up before the birds to spot the Big 5 in Kruger Park, still a good few hours’ drive away. And so one of the lodge guides came round at the ungodly hour of 4 to wake us up. I’m an early bird, but anything before a 6 a.m. wakeup leaves my stomach in small waves of nausea and my eyes rather unflatteringly puffy.

But we managed to shower, and pack the last little bit (packing and unpacking was a long hassle, as I tied everything tight on Priscilla’s warning that snakes make their way into ANYTHING) before heading down the dreaded bug path one last time to a waiting Jimmy—up and refreshed and in his Avis gear—ready to pack the bus. David had made us all packed lunches, but mine sat unopened till I finally threw it out 2 days later—a sandwich and boiled egg with no chance of making it in one piece into my churning stomach.

The whole getting up thing was just a blip in our nights’ sleep, though, as we all nodded off for the ride. (Near the end of the trip, Alan—a fellow Montrealer and Jimmy’s co-pilot after the almost-didn’t-make-it-asthma incident—speculated that Jimmy amused himself by warbling the steering wheel and watching our sleeping heads fly about in the mirror). A few hours later and we were in Kruger, bright and early, walking around the gate to stretch our legs and snap a few pics (including a croc some 100 feet away) before heading on our Avis bus tour of the park. 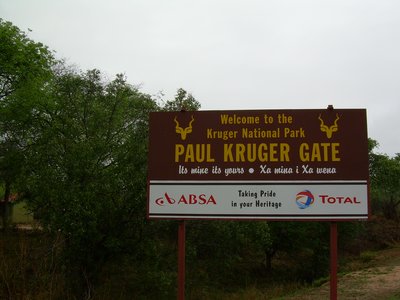 We probably spotted a Kudu first—a deer-like thing with white stripes across its back. So impressive and swift, and everywhere. But soon we were spotting more and more: buffalo, hippos (the most dangerous animal in Africa, believe it or not), white rhinos, two impressive giraffes, zebras, klipspringers, chimps (including one atop a tree doing what young men with dirty magazines usually do in the bathroom), warthogs, two lionesses hunting for prey, and—finally—elephants. Sasha spotted them first, earning her Priscilla’s elephant-spotting trophy: a bottle of Amarula.

Kudu in the bush 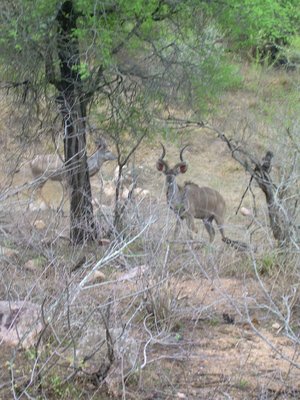 Klipspringer on a rock 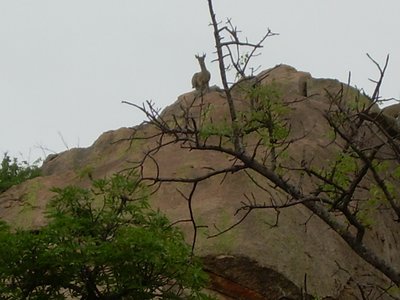 Lion on the lookout 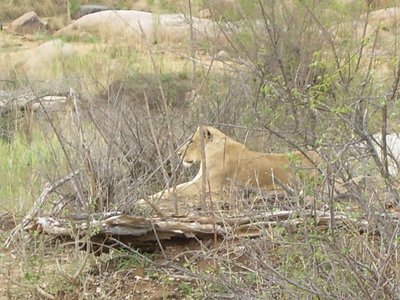 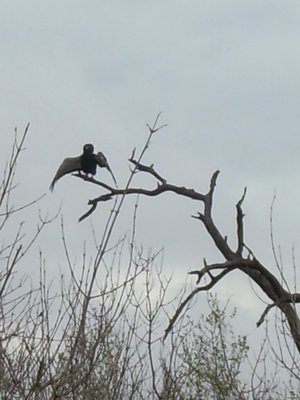 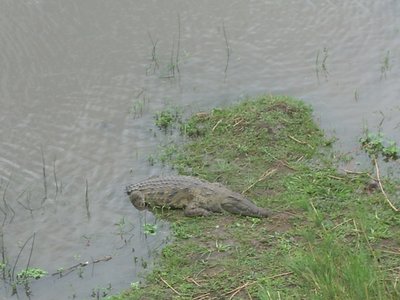 As we congratulated her on impressive spotting skills, however, Alan started to yell—between mighty asthma coughs and inhales on his puffer—that we’d better move the bus. Because just a few metres away, in a fit of adolescent bravado and a honk of his horn, one elephant was getting ready to charge. The bus. And so Jimmy got us moving and Priscilla gave us a play-by-play, including a moment of relief when she said the elephant finally realized what big, red monster it was up against and decided to back down. Still, our Avis queen would have looked impressive with a battle scar or two. 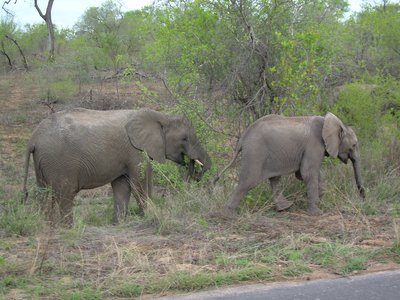 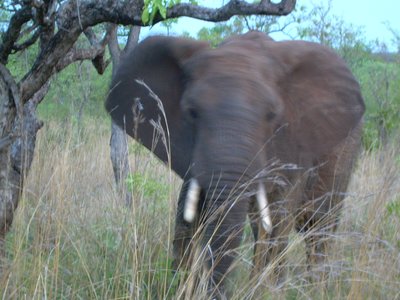 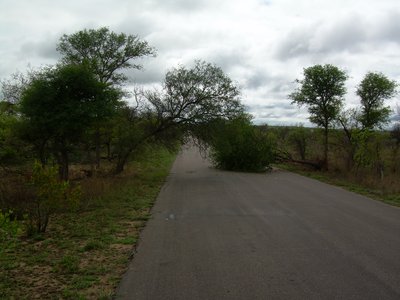 We spent the afternoon touring the park, stopping for lunch and a few purchases at the gift shop (isn’t there always a gift shop?), including a bandana for me. Because for all my intentions to rough it and pack as lightly as possible and not turn into some girly-girl, I was cursing myself for leaving the hairdryer at home. The big, wet lump of hair down my back felt like having a rain-soaked cat stuck to my neck, day in and day out. Nothing dries in humid weather—it just warms up and sticks and smells and drives one completely mad. So—following Erin from Tahoe’s example—I got a bandana and stuck my hair up out of my face and off my neck, for good.

We finally pulled into Pretoriuskop camp at about 5—just in time for us to run over to the waiting open-jeep for our night drive through Kruger. No time to get my coat, just a fleece and my camera and Neal and I squeezed to the middle at the front. (What’s with couples taking a window seat EACH, anyway? The nasty Russian guy next to me took up ¾ of the seat with his legs and his camera tripod and elbowed me whenever he needed a shot on my side—all while his girlfriend had her own comfortable window seat in back of him. So I elbowed him one for good measure.)

Our guide spotted Kudus and chimps climbing across a rock face—plus a klipspringer way up high and a family of rhinos and another of elephants that we got to see close up. Then dusk settled in, and out came the spotlights—2 in front and 2 in back—attracting bugs that occasionally whipped at our heads (with one so big it hit me from under my nose to my chin—and I covered my mouth after that). We spotted a few glowing eyes in the spotlights, the guide carefully trying not to shine the light at any prey, who’d be helpless to outwit their predators if blinded. Somehow the guide spotted a chameleon in the trees, in the dark—a green thing with great, big eyes amongst the leaves.

Then we traveled a little while longer, down the bumpy dirt road—scaring wild rabbits and blue-tailed birds, one of which somehow flew through the open windshield and into the back of the jeep before sailing out the other side.

And that’s when the guide spotted the porcupine.

Fat and round and prickly and running like mad to get out of the light. And just as it we started to chase us, the Jeep stopped. Stuck.

In the middle of Kruger park.

And so he tried to drive backwards. The forwards. Then he got out and stuck a piece of wood under the wheel. And then he said it, the words we didn’t want to hear: We’ll have to get out and push. As in get out in the park, after dark, when THE LIONS ARE HUNTING. For meat! And here we were, a walking smorgasboard of Canadian, French, Russian, American, and who-knows-what-else kinda delicacies, all wrapped up piggy-in-a-blanket-like in coats and marinating in bug spray and perfume and other such yumminess.

So we got out. And pushed. And we stuck close together, me looking around to see what I can spot—which ended up being some dim-wit woman from France who decided to take a good 20 steps back to capture the whole thing on film. And, forgive me, I thought—oh good. The lions can get that idiot first and give us ample warning to hop back on the Jeep and drive like mad. 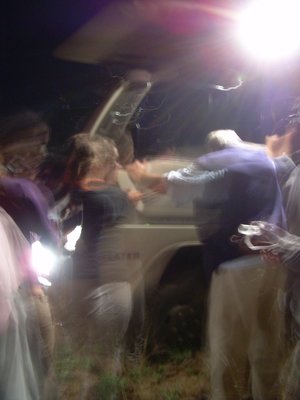 But the lions must have been looking elsewhere, and we all drove on in search of a lion and cheetah but found nothing more, pulling back into camp 3 hours after setting off, a little tired, a little cold, and covered in bugs (Sasha, holding the lamp in the back, with bugs up both arms). But dinner was ready, and our room was lovely—a clean and simple chalet with high ceilings, a sink, and warm clean blankets and not a bug in sight. We ate a barbeque and opened—ironically—our bottle of Porcupine Ridge and finished the night sharing Sasha’s bottle of Amarula on ice Jimmy found somewhere, and I felt the welcome, welcome relief of being pleasantly tired.

Neal wanted to stay up, but I knew it was my window. After 2 nights of tossing and turning in fear of the unknown, I was ready for a night of oblivious sleep. So I headed back, and fell asleep almost instantly—leaving Neal to finish up the wine with Steve from London (tall and kind and funny with an accent confused us all). Neal knocked on the door 20 minutes later, but I must have opened it in my sleep.

Our restful chalet in Pretoriuskup 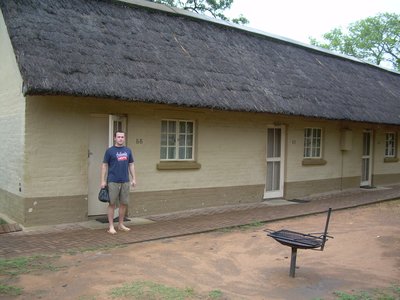 I’ve never slept so well in my life.

Previous Next Table of contents

This blog requires you to be a logged in member of Travellerspoint to place comments.

If you aren't a member of Travellerspoint yet, you can join for free.